The former leukemia patient gave his bone marrow transplant donor, Erich Grosse, 23, a huge bear hug when he met him on stage at HonorHealth’s Celebration of Life event. It reunites patients, families and caregivers while raising awareness about the need for bone marrow donors. 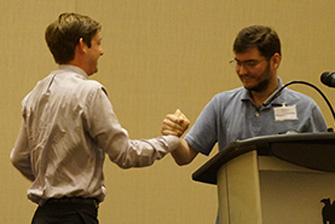 Native New Yorker Grosse had signed up to be a donor when he was 19 to raise awareness of the donor program at his college. Because less than one percent of unrelated people are a perfect match, Grosse never thought he’d get the call. Three years later, as he ate Lucky Charms before class, the phone rang.

“It was the best telephone call I’ve ever received,” said the diehard Yankees fan. “I just pictured someone my age, and instead of worrying about getting to class on time or going out, his worries were a thousand times more than mine.”

In 2015, Gonzales was a patient at the HonorHealth Cancer Transplant Institute, having relapsed with leukemia. His chance of surviving without a bone marrow transplant was zero. After tests revealed relatives were not a match, Tim’s medical team at HonorHealth turned to The National Marrow Donor Program.