Even at age 69, Saundra was happy to get on the trampoline with her grandkids at Christmas. "I was only on my hands and knees, and the kids bounced me, but it was fun," said the Peoria resident.

At Thanksgiving, she and her husband rented a large home in Flagstaff and invited their kids and grandkids to spend five days playing in the snow. "We had a wonderful time."

An eternal optimist, she enjoys shopping, golfing and hosting dinner parties. Lately, she's added walking to the mix to help build up her strength after a challenging year. 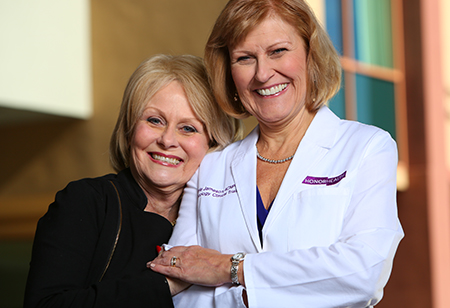 Earlier in the year, in January, she had received a diagnosis of stage 4 pancreatic cancer. Doctors gave her three to six months to live. "I figured I was going to die," she said. "The surgeons opened me up, saw that the cancer had metastasized, and then closed me right back up." They couldn't treat it surgically.

"I was never angry about my diagnosis," she continued. "I just became intent on figuring this out."

Saundra went online and searched for clinical trials. She found a promising one at the HonorHealth Research and Innovation Institute and the HonorHealth Virginia G. Piper Cancer Care Network. A month later, she enrolled in a clinical trial using three drugs administered by infusion to treat her advanced pancreatic cancer.

It's now been nearly one year since her diagnosis, and her most recent CT scan revealed an almost normal pancreas. "There's a tiny spot," Saundra said. "It's amazing! I feel wonderful. I did lose my hair, but it's coming back, and I have wigs in the meantime."

Gayle Jameson, nurse practitioner and investigator for the clinical trial, said that the pilot program for this trial has shown a positive response rate of 80%.

"Saundra has had a great response," Gayle said. "We're treading new waters with this and other trials, where patients are living much longer with advanced pancreatic cancer. We're now exploring maintenance therapies to keep the disease under long-term control."

Thrilled with her results, Saundra wonders why more people don't participate in clinical trials. "Why not help someone else while you're searching for a cure?" she asked.

The team members at the HonorHealth Research and Innovation Institute, from the receptionist to the nurses to the doctors, couldn't have done more for her, she said. "There's not a thing I would change. The doctors laid out choices, and then we made the decisions about my care."

Saundra is now on an oral maintenance medication. After her last infusion, she said it felt like leaving family when she went out the door.

"The Research Institute is a wonderful place; it's not a sad place," she said. "People have hope there. I say this all the time: ‘I started with no cure and no hope. Now there's no problem!' Thank you, HonorHealth Research Institute!"

For more information on pancreatic clinical trials at HonorHealth Research and Innovation Institute, please contact the Oncology Nurse Navigation Team at 480-323-1364 or send an email.