If you're a woman in your mid- to late 40s, you may be experiencing the symptoms of perimenopause, the span of approximately four years before menstruation totally stops and menopause begins.

Symptoms of perimenopause include:

Here are some fast facts around perimenopause: 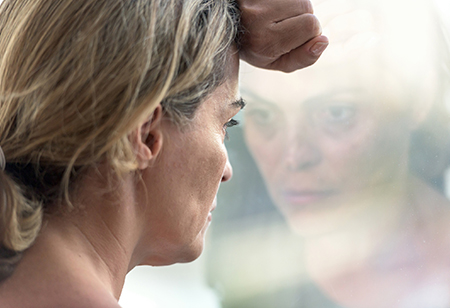 Why can depression occur during perimenopause? Estrogen levels decline. This hormone is responsible for increasing the effects of serotonin and norepinephrine in the brain, explains Rachel Spieldoch, MD, gynecologist, and an independent member of the HonorHealth Medical Staff. "These are important neurotransmitters for regulating mood in your brain."

While most women transition into menopause without experiencing debilitating behavioral health issues, several factors can cause or contribute to depression or anxiety during this time.

Depression or anxiety may be related to aging or lifestyle, and not directly to hormonal changes, Dr. Spieldoch says, but these factors can boost your risk of emotional symptoms during perimenopause.

"It's thought that perimenopause can exacerbate or cause a relapse of depression and anxiety for people at a higher risk, but does not cause the disorder," she says. "Insomnia, health disorders, medication side effects, sedentary lifestyle and poor eating habits, low self-esteem, changes in childbearing status and social stressors can all have a negative impact."

You're also at higher risk if you have a preexisting tendency toward anxiety or depression, a history of postpartum depression, an underlying psychiatric disorder, surgical menopause or premenopausal dysphoric disorder (a severe form of premenstrual syndrome). Women with a history of mood disorders related to fluctuating hormone levels (prior to menopause) are more likely to experience significant symptoms during the transition period.

Several studies suggest that infertility drugs and treatments, such as in vitro fertilization, may put women at higher risk for early menopause and mood disorders during perimenopause.

"Onset and exacerbation of schizophrenia, panic disorder and obsessive-compulsive disorder can occur during the perimenopausal period," she says. "Worsening symptoms for people with underlying bipolar disorder and major depression can also occur during this transition period."

"Healthy eating habits, quitting smoking and increasing exercise can be beneficial," says Dr. Spieldoch. To boost your mood during perimenopause, she also recommends:

Depression and anxiety often resolve with menopause, at which time hormone fluctuations stop, and the low hormone levels stabilize.

Schedule an appointment with an OB/Gyn.