He has both an endearing personality and a scientific bent. The combo pretty much guarantees that Matt, 29, will be a terrific surgeon and physician when he finishes his surgery residency in four years.

He's one of those unusual humans who's really good at science and math and subjects like creative writing. While majoring in nutrition as an undergrad at the University of Arizona, he minored in chemistry, Latin and creative writing.

Um, Latin, as in the dead language? "My grandfather was a judge and a Latinist," the Chandler native said. He figures he inherited the same Roman-loving gene.

Matt's love of science helps him thrive as a first-year surgery resident. He assists in the operating room, learning the ins and outs of precise surgical technique. "It's an anatomy lesson every time," he said. "The beauty of surgery is that you operate, and two weeks later, the patient is better."

His girlfriend, Kellie, a family medicine resident, doesn't share his enthusiasm for his surgery. "She thinks it's boring," he said with a laugh. 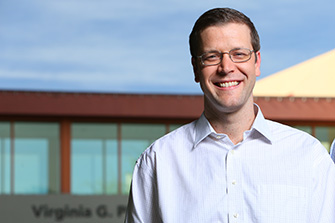 Matt hasn't settled on a surgery specialty for his career yet — hepatobiliary surgery (the liver and nearby ducts) is a possibility.

"Cancer surgery would be interesting, too," he noted. Perhaps that's because he's a leukemia survivor.

In the fall of 2013, when he was 27 and in his final year of medical school, he endured a month or so of intense back pain between his shoulder blades. "It was a tearing kind of pain that wouldn't let me sleep," he remembers.

Unfortunately, he was interviewing for residency posts that month. "I was drenched in sweat" at more than one interview, he said. "They thought I was nervous. I wasn't. I was in a lot of pain." He also lost 50 pounds in 30 days.

Long soaks in the tub and doses of naproxen helped with the pain, but it finally drove him to the emergency room at HonorHealth Scottsdale Shea Medical Center. Tests revealed an unanticipated diagnosis from hematologic oncologist Tara Iyengar, MD: Matt had acute lymphoblastic leukemia.

"Kellie started crying. We both struggled with it," he said. "I was actually kind of mad about it.

"I went to the ER on a Sunday," he continued. "On Monday, I received a chemo port, and on Tuesday, I started chemotherapy. A hospitalist handed me the MRI report: Infarctions (death) of pieces of bone marrow were causing my back pain. It got much better after the first round of chemo.

"I was lucky I went to the Shea ER," Matt said. "That hospital has the best leukemia treatment in the state. Dr. Iyengar was incredible; she was there for me every day. And the oncology nurses were excellent."

Chemo and a transplant

Dr. Iyengar remembers weighing the chemo alternatives. "I decided to order chemo based on a pediatric regimen," Dr. Iyengar said. "Matthew was only 27 at the time. He also had some liver abnormalities when he started chemo, but I decided not to reduce the chemo treatment — I thought the liver issues were related to the leukemia. I also recommended a bone marrow transplant to give him the best chance of a long-term remission."

The chemo was tough, Matt admitted. "I had profound side effects, vomiting mostly. I needed blood transfusions. During outpatient chemo, I got Cushing syndrome — the rounded face, high blood pressure, etc. — from corticosteroid medication."

After a month's stay in the hospital, Matt got some great news from Dr. Iyengar on Christmas Eve, 2013: He was in remission and could go home before facing the bone marrow transplant.

"There's a 90 percent chance of remission with the initial chemo," said Jonathan Abbas, MD, the oncologist who directed Matt's bone marrow transplant. "But there's also a high chance of the leukemia coming back. That's why he needed the transplant."

Matt's brother, Josh, 18 months his senior and living in Taiwan, sent a cheek swab to the lab for testing. Could he save his brother's life by being a match and donating bone marrow cells? With a 25 percent chance, the news was great — he was a match!

Josh traveled to HonorHealth Scottsdale Shea Medical Center for the transplant process. For five days, the medical team "primed" him with injections of growth factor. It increases stem cell production and moves the cells into his circulating blood for collection. Then a procedure called aphresis circulated his blood through a machine, separating it into different parts — including the precious bone marrow stem cells to be used in the transplant. The last step? Returning the remaining blood to his body.

Matt faced high-dose chemotherapy to kill any remaining leukemia cells before the transplant. "The chemo also dumbs down the immune system to help the patient's body accept the donor's stem cells," Dr. Abbas said. "And, yes, it's tough on the patient."

The actual bone marrow transplant was easy — an IV infusion of his brother's donated thawed cells, much like a blood transfusion. The aftereffects? Not so easy. "I pretty much smelled like plastic for two days due to the industrial solvent DMSO," Matt said. "It's used as a preservative for the bone marrow cells.

"It takes a couple weeks for the stem cells to take hold," he continued. "I was pretty tired; I slept a lot." The stem cells also caused renewed back pain. "I was on a Fentanyl drip for the pain; then I had withdrawal from the Fentanyl with more nausea and vomiting."

Finally, in March 2014, he went home where Kellie and his passion for their Australian shepherds Beaker and Bunsen boosted his recovery. "Our dogs have big personalities," he said with a grin.

Professors at the University of Arizona-Phoenix College of Medicine allowed him to shuffle his final courses a bit, and he returned to his final courses in med school, wearing a mask at the back of the classroom to safeguard his compromised immune system. "It all worked out. I recovered, and I graduated." Matt said.

Dr. Abbas says "Matt's prognosis is excellent" as his two-year anniversary approaches. "Once the patient is two years out from the transplant, the chance of the leukemia returning is extremely small."

Next Matt had to decide if he should delay his demanding surgical residency and its 75-plus hours a week. "No one in surgery understands leukemia," he said with a smile. Ultimately, he took it on and hasn't regretted it. He loves to learn, and that happens every single day on the job.

What did he learn from cancer? "Life is sweeter now," he said. "A walk around the block after I got home from the hospital was beautiful. And what I consider to be important has changed. I feel like I have less time now — less time to live my life."

He still has big dreams. "My goal as a doctor is to help someone. I want to change the healthcare system for the better, for the patient. I've learned that patients just want to be heard, and that doesn't always happen, especially for difficult patients."

He also takes his own health much more seriously. "Food is the easiest thing. Kellie and I eat almost all fruits and vegetables now and lots of turmeric," he said. He tries to fit a yoga exercise tape into his daily routine. "I miss it when I don't."

In 10 years, he sees himself with another degree, in statistics probably. Or maybe in research or business.