Chatting before a meeting on Jan. 23, 2018, Marilyn, 78, suddenly thought, "I don't feel well. I feel dizzy." Then she fell back in her chair and onto the floor. The Scottsdale resident was in full cardiac arrest.

"I had no warning of the heart attack," she says. "I woke up tired that morning, but that wasn't unusual."

Susan, the woman she was chatting with, fell with her to break her fall on the kitchen floor. Three other members of the group, each of whom had medical training, rushed over and began performing continuous cardiac resuscitation (CCR). Another called 9-1-1. Everyone was praying, Marilyn later learned. 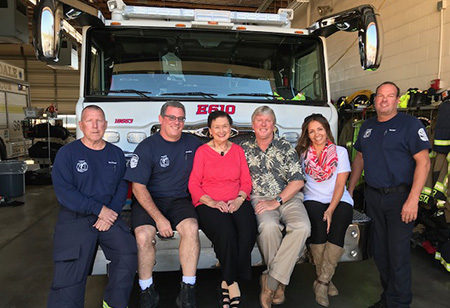 So began the prolonged, remarkable battle to save her life.

Paramedics from Scottsdale Fire Department Station 10 at 100th Street and Bell Road arrived at the house in five minutes. Searching for vital signs, John determined that Marilyn was in V fib, a disturbance in the heart's electrical rhythm. It causes the heart's lower chambers to quiver, not contract.

"We shocked her three or four times at the house, and gave her epinephrine and magnesium sulfate," says John. "She had a pulse for a while on the way to the hospital, and we got a blood pressure."

While rushing to HonorHealth Scottsdale Thompson Peak Medical Center – about 10 minutes away – the paramedics watched Marilyn's vital signs travel in waves, up and down. He and fellow paramedic, Tim, had to shock her heart a few more times to restart it.

By the time they arrived, "she'd been unresponsive for 35 minutes," says Charles "Chip" Finch, DO, the Emergency Department physician who cared for her. "She had no pulse and no blood pressure without CCR. We secured her airway and continued to work on her, but at 8:45 p.m., there just wasn't much more that could be done for her. I asked my medical team, 'Is there anything anybody else wants to do?' We stopped CCR. People started leaving the treatment room."

She was indeed. "The technical term is ROSC – return of spontaneous circulation," says Dr. Finch. "I found a pulse and hooked her up to a ventilator to assist her breathing and blood pressure. I remember saying, 'It's a miracle!' Marilyn's the only patient I've ever had to make a full recovery after 35 minutes.

"I know what helped is the fact that we work so often with Scottsdale Fire paramedics," Dr. Finch continues. "We all know each other, and we work well together."

A cardiologist and ICU intensivist entered the room to evaluate the patient. A bit later, Marilyn's husband, John, remembers asking the cardiologist if she'd give Marilyn a 10% chance of surviving. "That's being overly optimistic," came the reply.

Three weeks at the hospital

Despite the long odds, Marilyn made it, spending three weeks at Scottsdale Thompson Peak Medical Center where she received both a pacemaker and a defibrillator to restore a proper heart rhythm. She spent two more weeks at a rehab hospital before returning home. She also had to recover from broken ribs resulting from the many minutes of CCR she received. Marilyn concluded that it was a small price to pay for being alive.

"Everybody at Thompson Peak was phenomenal," she says. “John told me that doctors and nurses kept coming by to see me, saying they wanted to meet 'the miracle woman.'"

At a fire station reunion months later with her fire department and Scottsdale Thompson Peak Medical Center lifesavers, Marilyn tells the group: "I just want to thank you all for saving my life. It certainly shows the value of knowing CCR.

"Our dear friend, the Catholic archbishop of Santa Fe, came to see me in the hospital," she continued, "and told me that "God wasn't ready for you. My reply was that 'I wasn't ready to see God either – I'm too young to meet God!'"

If you'd like to check on the health of your heart, we're here for you.