Tom, a Chandler resident, is cancer free at 58. But he has a family health history marked by cancer: His grandmother, four aunts and two first cousins have all passed away from various forms of cancer on the maternal side. And six first cousins on Tom's mother's side have been diagnosed with cancer.

On the paternal side, Tom's grandfather died from lung cancer, and his father and a first cousin have had cancer.

Tom's mother died in 2002 of pancreatic cancer at age 75, just six weeks after diagnosis. In her 40s, she'd had a mastectomy after a breast cancer diagnosis.

His sister, Chris, wisely urged him to seek out genetic counseling and testing in 2016. At the counselor's recommendation, he attended a pancreatic cancer support group at the HonorHealth Virginia G. Piper Cancer Center. 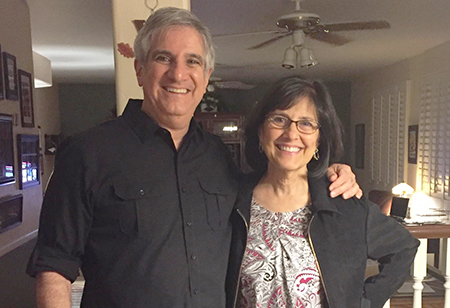 Tom's genetic counseling and testing revealed that he has the BRCA2 gene mutation; so does Chris. Their two brothers and another sister do not have the mutation.

"I wasn't that surprised to know that I had the BRCA2 gene mutation — and I wasn't depressed," Tom said. "I had a 50/50 chance of having it. It doesn't mean I will get cancer. But I am at higher risk for the disease."

The significance of a BRCA gene mutation

"Everyone has BRCA1 and BRCA2 genes," said Kristin Hendrickson, RN, a nurse navigator in the Early Detection Programs at the HonorHealth Research Institute in Scottsdale. "It's when you have mutations on these genes that your cancer risk rises. Men with the mutation are at higher risk for breast cancer — 8 percent vs. 1 percent. They're also at higher risk — 5 percent — for pancreatic cancer over their lifetime. Their prostate cancer risk also rises."

After receiving genetic counseling and testing, Tom attended a pancreatic cancer support group at HonorHealth. Erkut Borazanci, MD, primary researcher for the Pancreatic Cancer Research and Early Detection Program at the institute, was the speaker. After listening to his presentation, Tom quickly concluded that both the Pancreatic and Breast Cancer Early Detection programs would benefit him.

Although he's currently symptom- and cancer-free, "they're going to watch me like a hawk," Tom said. He met with Dr. Borazanci, had a physical exam by a nurse practitioner and underwent an MRI and blood tests.

"I only have to visit twice a year for exams and testing," Tom noted.

HonorHealth Research Institute researchers want to be able to identify pancreatic cancer at an early stage.

"It's usually found in a late stage when it has metastacized. We want to change the paradigm and diagnose it at a more treatable stage," Kristin said.

Imaging studies could reveal a pancreatic cyst (similar to a polyp in the colon), which could be a precursor to pancreatic cancer. Results of the imaging studies are presented to the HonorHealth Pancreatic Tumor Board made up of radiologists, surgeons, GI physicians and genetic counselors.

For the Breast Cancer Early Detection Program, Tom met with primary researcher Jasgit Sachdev, MD, had a physical exam by a nurse practitioner, a mammogram and blood tests. This program has many of the same goals as the pancreatic program — finding the disease early and discovering patterns in all the data collected as well as breast cancer biomarkers.

His doctors have recommended a skin cancer screening and a visit to an ophthalmologist to check for melanoma because he's also at higher risk for this type of cancer.

"Participants in the Pancreatic Cancer Early Detection Study should be seen in our clinic during the year if they have new symptoms such as abdominal pain, gastrointestinal reflux, feeling full early while eating a meal, or unexplained weight loss," Kristin said. Although these symptoms can be attributed to other diseases, they might indicate pancreatic cancer.

"Surveillance is key for those at higher risk for cancers," Kristin said. "These individuals need to be proactive, and the early detection programs were designed for this."

Tom likes the idea of having his health closely monitored. "It's reassuring, very informative and puts me more on top of my health. The staff has been excellent, very professional. I'm happy to be part of it if I can help others avoid such terrible diseases."

The fact that he can help further medical science by participating in the studies is another plus, he said.

If you think you might qualify for the Pancreatic or Breast Cancer Early Detection Program, email HonorHealth to learn more.