Garrett L. is no stranger to hospitals and heart procedures. He’s been a frequent flyer over the years, having had his first heart attack at the young age of 36. You might assume that he’d been in poor health leading up to his heart attack, but that wasn’t the case.

“It came as a complete surprise to everyone,” says Garrett, who was at a healthy weight, didn’t smoke or drink, and didn’t have any known risk factors at the time. “I remember people looking at me in the hospital, in the cardiologists’ offices, saying that I didn’t belong there, but I did.”

Now age 58, it’s been more than twenty years since that first heart attack, and Garrett has had two more heart attacks, quadruple bypass surgery and a number of stent procedures and treatments at various hospitals during that time.

However, he’s spent the last eight years under the care of Mayurkumar Bhakta, MD, an interventional cardiologist at HonorHealth Heart Group. It was under Dr. Bhakta’s care that Garrett finally found healing. 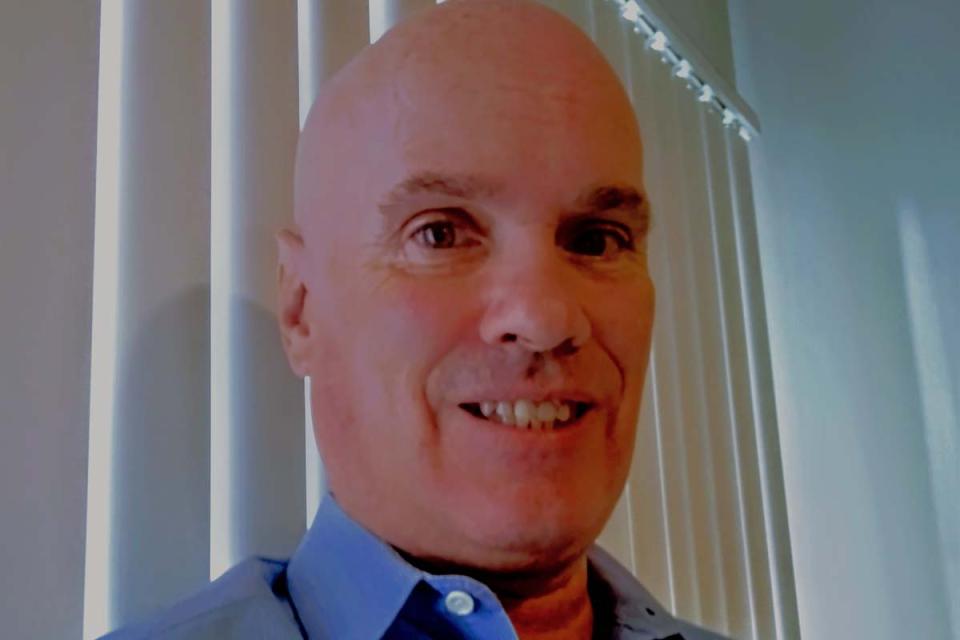 In March 2016, Garrett first came to HonorHealth John C. Lincoln Medical Center, already many years into his heart journey. They did an angiogram and found that all but one of his prior bypasses had failed.

“At that point, we stented the rest of his arteries and did a high-risk complex percutaneous coronary intervention procedure, so we were able to open up all his arteries,” says Dr. Bhakta. Stents and percutaneous coronary intervention procedures open up narrowed or blocked sections of the artery, which restores blood flow to the heart.

But just two years later, Garrett started going downhill again. Tests revealed the high-risk artery they had opened up had become blocked again, known as chronic total occlusion. Dr. Bhakta tried opening it up again and couldn’t, so he sent Garrett to two additional health systems in the Valley for second and third opinions, in hopes they would find someone who could help. Unfortunately, Dr. Bhakta and the other experts determined that medicinal therapy was the best approach at the time.

Fast forward another year, and Garrett presented at the hospital with a blood clot in another artery. They were able to treat the clot, but a year later, he was back in Dr. Bhakta’s office with angina, or chest discomfort and pain.

Persistence and new technology pay off

By this point in Garrett’s journey, laser atherectomy had been implemented as a unique offering at HonorHealth. This treatment uses a laser to burn away all the scar tissue in the arteries. Dr. Bhakta combined this treatment, which isn’t widely used although it is quite effective, with a scoring balloon in his arteries and additional stents.

Since this latest surgery two years ago, Garrett is feeling great. The pumping function of his heart, which at one point had been consistent with heart failure, is now completely normal.

Dr. Bhakta continued: “The most important thing for somebody that young is that we are trying to give them their life back with whatever science and technology has to offer, and thankfully we have that at HonorHealth. We were able to give a relatively young man his life back, and that’s what feels the best about this whole thing.”

These days, Garrett is thankful to be alive. He spends his days working from home, which is easier on his heart and his ongoing recovery. Garrett and his wife, Laura, who helped him all along the way, enjoy taking day trips, and he plans to be around for her for many more years. He continues to see Dr. Bhakta frequently for monitoring, so they’ll know as soon as possible if anything needs adjusting in the future.

“I’m just so thankful for everything that HonorHealth and Dr. Bhakta have done for me,” says Garrett. “I know I’m a heart patient and that won’t go away, but I have a lot of trust in Dr. Bhakta and the team. The care is definitely unmatched.”

Care that’s made with you in mind

If you need heart care, we’ve got you covered. Whether you live in the metro Phoenix area or you’re looking to travel to HonorHealth from another part of the state or country, you’ll receive in-depth care designed with your convenience in mind.