Megan welcomed her son on July 20 at just 26 weeks and two days after an emergency C-section. Unable to breathe for at least two minutes at birth, Holden weighed only 1 pound, 15 ounces, and measured just 14 inches long.

On days one and two postpartum, Megan visited her struggling preemie in his isolette in the Level III NICU at HonorHealth Scottsdale Shea Medical Center.

But on day three, she was rushed to the ICU, in trouble herself. After a difficult pregnancy with ulcerative colitis and hyperemesis gravidarum — the severe nausea and vomiting that Britain’s Kate Middleton suffers with each pregnancy — Megan had ballooned with 40 pounds of water weight after her C-section.

"I was malnourished and dehydrated for much of my pregnancy," she says. "The severe nausea and vomiting started at nine weeks." At 19 weeks, her doctor discovered that Megan’s cervix had thinned, requiring stitches to keep it closed and the baby safe.

"I was put on strict bed rest at that time," she says. At 26 weeks, my body was just done. Contractions started, and we headed for Scottsdale Shea Medical Center.”

Holden was transverse – lying horizontally — inside me. He wasn’t ready to be born, but his blood pressure and heart rate escalated in response to the contractions. The doctors decided to do a C-section.

"They showed him to me as soon as he was born," she says, "and I asked my husband Chad if he was OK. He never really answered me." The doctors immediately rushed off with the newborn to coax him to breathe. 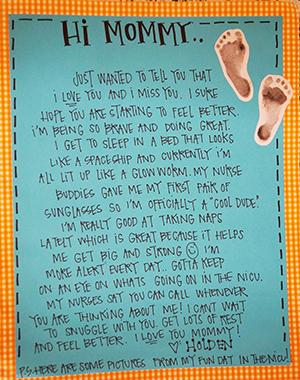 'I’d whisper to him, and he'd wiggle'

In ICU on day three, a CT scan confirmed a flare-up of Megan’s colitis. Her specialists discussed removing her colon, but decided to wait and see if it would calm down. Meanwhile, diuretics slowly began to siphon off the 40 pounds of water weight.

Dubbed "Dr. NICU" by his wife, Chad brought her detailed updates on their son when he visited her. Video visits with the baby helped, too. "I’d whisper to him, and he’d wiggle," Megan says. She tried not to worry about her baby’s struggles, but Holden was still quite sick. In addition to his breathing challenges, the valve in his heart that normally closes shortly after birth was still wide open. His blood was not getting the proper oxygenation, and his neonatologists continued to hope the valve would close.

Out of the ICU after two days, but still a patient in the hospital, Megan received a huge morale boost when she got a note from her baby son. "My nurse walked in the door of my room with a note from him, a cloth he snuggled with and that carried his scent, and a baggie of pictures," Megan remembers. "Hi Mommy," the note began. "I’m being so brave and doing great … my nurse buddies gave me my first pair of sunglasses, so I’m officially a ‘cool dude’… I’m more alert every day … gotta keep an eye on what’s going on in the NICU …"

"I was crying so hard I could not catch my breath," Megan says. One of Holden’s NICU nurses, Aarika, had written the note in Holden’s voice.

"That Aarika took the time to do this for me and my family — it was so special," Megan says. "We taped the pictures and the note on the wall in my room."

"I can’t imagine having a brand-new baby and not being able to see him, so I thought Megan might like to get an update from Holden himself," Aarika says. "The next day that I took care of Holden, I spoke to her on the phone. She asked if I was the person who sent the note and broke into tears. So did I."

Another note and a photo soon arrived from Holden. "My nurses tell me you had a tough day yesterday, too. I can’t wait til we can cuddle together so we can help each other feel better … they gave me blood … kind of cool … kind of creepy! But it was like superhero juice because I feel so much better and stronger now … the nurses think I’m super cute …"

It turned out that the same day Holden needed a transfusion, his mom did too. "I wanted Megan to know she wasn’t alone, so I sent another note from Holden," Aarika says. "I heard she was having a rough day. I wanted to make sure she knew how tough her little guy was!"

"We have an awesome team here at Scottsdale Shea to help these babies: physical, occupational, speech and respiratory therapists, and developmental specialists," she continues. "They guide us on the babies’ gestational age, what to expect and how to help. It’s a team effort to help these little babies. The best part is celebrating all the milestones — when they can breathe on their own, when they move from isolette to crib, their first feeding."

The next time Aarika took care of Holden, Megan had finally been discharged from the hospital after an 18-day stay. "Megan came to the NICU to see him. We both cried. It’s been so tough for her; she’s gone through so much. But she understood things like his central IV line because she had had one. And she understood his IV nutrition because she experienced that, too," Aarika says.

Holden wasn’t out of the woods yet. Surgeons had to operate on his heart when he was 29 days old to close the valve that normally closes on its own. "He thrived almost instantaneously when oxygenated blood started pumping through his body," Megan says. "He’s feisty, but a quiet feisty. And he’s the sweetest baby — he doesn’t fuss or cry. He’s content even when he’s being poked and prodded."

On Sept. 13, 2017, a week shy of two months old, Holden graduated from an isolette to a crib in the NICU. His weight had climbed to 4 pounds, 5 ounces.

Once his lungs mature and he no longer needs respiratory support, he can start bottle feeding. "He’s ready for a bottle," his mom said on Sept. 14. "He’s sucking on a pacifier, rooting with his hands. But we have to get him to breathe better."

His big sisters, Cadynn, age 10, and Beckett, age 2, love to visit him in the hospital. Beckett has even named one of her baby dolls after her brother. In the meantime, mom loves to hold him skin to skin and rub his head when she visits him in the NICU. "I read a book, and he sleeps on me," she says. "He could do that all day long." Soon he’ll be able to snuggle with mom, dad and sisters whenever he likes, home at last.

What is a Level III NICU?

Because they often are born sooner and smaller than single-birth babies, twins, triplets and other multiple-birth babies often need to be admitted to a NICU. Babies with infections, birth defects or heart issues also are cared for here.

NICU team members work with parents to create a care plan for their high-risk newborn.

Learn more about HonorHealth's maternity services, including the NICU, prenatal education and classes, and more.