Scottsdale Shea Medical Center offers the Northeast Valley's most fragile or critically ill newborns specialized care close to home. This neonatal ICU is the only one in the northeast Valley with the state's highest possible Level III designation, granted after a rigorous survey and evaluation from the Arizona Perinatal Trust.

As a Level III NICU, it provides the most advanced care for newborns of any gestational age. The facility has cared for babies as small as 1.01 pounds at 25 weeks gestation and as young as 24 weeks gestation at 1.5 pounds.

The 28-bed Level III NICU features state-of-the-art equipment and a team of experts who provide 24-hour in-hospital coverage for infants who require advanced care. The NICU is staffed by: 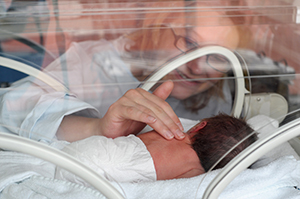 The NICU's family-friendly policies encourage parents and families to remain close to their newborns.

Infants who have been in the NICU are more likely than others to have various developmental difficulties. Specially trained HonorHealth professionals can provide follow-up evaluations to identify any issues that a child may show at a very early age. This allows families to get early intervention and therapy services, if needed.

Once services are in place, ongoing visits with HonorHealth experts can monitor your child's progress and any identify any residual needs.

Specialists at Scottsdale Shea Medical Center perform a number of surgeries on premature infants or newborns including (but not limited to):