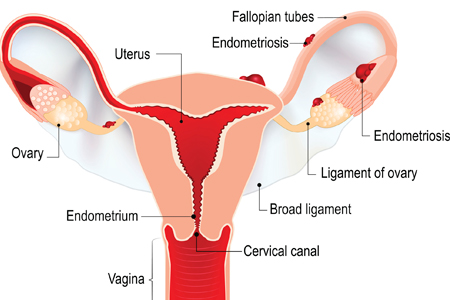 Each month, the endometrial tissue inside your uterus thickens. After ovulation, if you don't become pregnant, the endometrial tissue sheds and bleeds in a process known as menstruation. With endometriosis tissue, the same thing happens, causing pain and inflammation in the areas with endometriosis outside the uterus. Surrounding tissue becomes irritated. Scar tissue and adhesions result, causing pelvic tissues and organs to essentially stick together. When this happens inside the ovaries, blood-filled cysts called endometriomas can form. Over time, this monthly process causes pain that can be severe, and fertility problems may develop.

If you're a menstruating female, you can have endometriosis. You can develop it as young as your teen-age years, and it may continue until you go through menopause.

There does seem to be a genetic connection. It's not uncommon to see mothers, daughters and sisters who have endometriosis.

Patients with certain uterine anomalies (abnormalities) can develop endometriosis over time due to a blockage of the menstrual flow and the shedding of endometrial tissue. This material drains through the fallopian tubes back into the pelvis, allowing endometrial cells to implant in the pelvic organs outside the uterus.

There are different theories about how endometriosis develops:

What are endometriosis symptoms?

How is endometriosis diagnosed?

Endometriosis is suspected based on your symptoms, and family history may make it more likely. Your HonorHealth gynecologist may do a pelvic exam and/or pelvic ultrasound, and may then prescribe medication to see if your symptoms improve.

The only way to definitively diagnose endometriosis is by laparoscopic surgery.

In rare cases, endometriosis-like symptoms may also be caused by abnormalities of the uterus, such as adenomyosis and uterine fibroids.

How is endometriosis treated?

There's no cure for endometriosis, but treatment can help. It depends on whether you're treating pain, infertility or both.

For pain, treatment options include:

Your treatment choice may depend on whether you want to get pregnant, treatments you've had previously, and how close you are to menopause.

If you're experiencing infertility as a result of endometriosis, you and your HonorHealth gynecologist will likely discuss minimally invasive surgery followed by infertility treatment to help you conceive as soon as possible after you've healed from surgery.

Find a highly qualified gynecologist in the greater Phoenix area or call 623-580-5800 for more information.