You can get the latest advances in cancer radiation treatment with leading radiation oncology providers in the HonorHealth Virginia G. Piper Cancer Network.

Radiation therapy is useful because cancer cells are more vulnerable to radiation than healthy tissue. Precise targeting of radiation beams can prevent radiation from affecting surrounding tissue. Focused radiation shrinks tumors and kills cancer cells by destroying their genetic material, preventing them from growing and dividing. Radiation effectively eliminates small amounts of cancer that might remain after surgery or chemotherapy.

Cancer cells treated with radiation don’t die right away – they just can’t keep growing. Over time, the cells will die off and be cleared away by the immune system.

Radiation therapy may be used to treat almost every type of solid tumor, including cancers of the brain, breast, cervix, larynx, lung, pancreas, prostate, skin, spine, or soft-tissue sarcomas.

Today's high-precision techniques allow the delivery of higher doses of radiation with a dramatic reduction in side effects.

How is radiation therapy delivered? 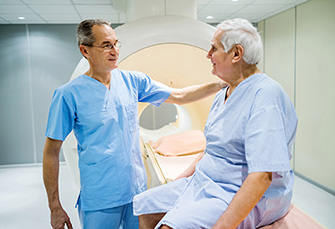 It can be delivered in two ways, externally and internally:

Radiation may be given before, during or after surgery. Doctors may use radiation:

Radiation may also be given before, during, or after other cancer treatments to shrink the cancer or to kill any cancer cells that might remain.

Side effects of radiation therapy

As it kills or slows the growth of cancer cells, radiation therapy can affect nearby normal cells. You may feel tired — suddenly or all at once. Depending on how much fatigue you feel, you may need to ask for help with meals, transportation or child care.

To protect healthy cells, your radiation expert will:

Sometimes, your doctor will change the radiation dose or schedule to reach the total dose of radiation more quickly.

How often will you have treatment?

Most people have external beam radiation therapy with the same dose of radiation once a day, five days a week, on an outpatient basis. Treatment lasts up to six weeks, depending on your treatment plan.